Kingdom Networking For The Local Church 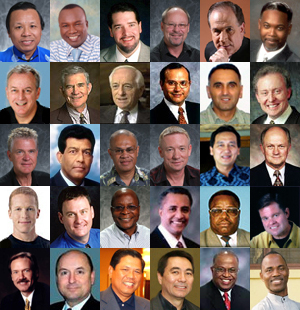 The word “billion” has crept into the thinking, planning and vision of more and more enterprises worldwide. The late CEO of Coca Cola Robert Goizueta said, “A billion hours ago, human life appeared on earth. A billion minutes ago, Christianity emerged. A billion seconds ago, the Beatles changed music. A billion Coca-Colas ago was yesterday morning.” Soon, on any given day, Coca Cola will serve more than one billion Cokes before noon.

Proctor and Gamble recently announced an ambitious goal to add one billion new customers in just three years. The billion Internet users worldwide are expected to double to two billion in a few short years. One billion new cell phones will be sold in this year alone.

If Coca Cola, Proctor and Gamble, the Internet and cell phones can reach a billion people in such a short period of time, surely the Body of Christ with our

resources can do the same!

A few Walt Disney executives manage year after year to make Mickey Mouse the most recognizable name in the world. With one billion Christians and a Church that is 2000 years old, we cannot be satisfied with playing catch-up to a cartoon.

Billion.tv is about doubling the number of Christians in the next ten to fifteen years and striving to finish the Great Commission by AD2100. Warren Wiersbe says, “The mind is not a debating hall but a picture gallery.” Once the mind has been shaped by a new idea, it will never return to its original shape. Likewise, once the heart is shaped by a new vision, to retract it will never satisfy. To reach one billion, we must be about:

Bridges: Building a fence to keep people out is easier than building a bridge to connect people to your life and ministry. Fences define territories but bridges build networks. Fences are fast. Bridges are slow. Fences state ownership. Bridges share partnership. Instead of being a fence-straddler, become a bridge builder. Our Lord is bringing the best methods, best minds, best models, best measurements, best multiplication for synergistic value.

Inspiration: Small dreams never inspire the hearts of great people. The billion vision is about not caring who gets the credit as long as God gets the glory. When NASA was launching the first rocket to the moon, they did not ask themselves where the moon was but where the moon will be in the days ahead. Vision is about projecting where our world will be in the next fifty to one hundred years.

Love: It is not how long we live, but how long we love that makes the ultimate difference in life. We are to love the lost whether or not they love us back. “Instead of cursing the darkness,” Billy Graham said, “Be sure to light a candle.” If the local church was to light a candle on the communion table each Sunday when a soul was saved the previous week, could parishioners sit through a service without it lit? The Church’s love for the world does not accept having only a percentage of the world come to Christ.

Leadership: The billion vision has inflamed the hearts of some of the Christian community’s greatest leaders. The global leadership team now consists of more than 30 Cochairs. Billion.tv is not about one person or organization fulfilling the vision, but a collective force applying synergistic energies. The philosophy is not the West to the Rest but the Best to the Rest.

Investment: Something worth doing is worth doing with someone else. The billion vision is about finding the best proven training resources already produced to make them available worldwide. Billion.tv is less about investment of money, and more investment of minds. Through synergistic investments, we accomplish more together than we ever could alone.

Ownership: No single organization or person can fulfill the Great Commission alone. But, we each must take individual ownership and strive to obey Christ’s command to go and preach the Gospel to all nations. It is the last zero in the 1,000,000,000 that compounds value to everyone else. Ownership is not about being first, but about serving everyone.

Network: The Second Billion Movement is not about the “net worth” but the “network.” The late Dr. Adrian Rogers said, “A net is a bunch of little nothings tied together.” Although without much force when alone, we are powerful when networked together. Although little alone, we are big together. Although limited in reach on our own, we hold the entire world in our hands together. It is not about steeples, but peoples. We are not about the West going to the Rest, but the Best giving together to win the Rest.

The Second Billion vision is about the new face of Christianity and its bridges, inspiration, love, leadership, investment, ownership, and networking.

Let’s win the Second Billion together!