February, 2001 – Two leaders meet to discuss how to they can help the Global Church get in position to complete the Great Commission by winning a billion souls to Christ.

January, 2002 – The first Global Pastors Conference is held in Orlando, Florida, brings leaders from all parts of the globe and all streams of Christianity.

January, 2004 – A second Global Pastors Conference is held in Orlando to launch initiatives. Training is videotaped for the Internet. 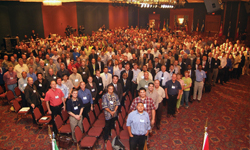 August, 2004 – A Global Conference Call brings world leaders together. Focus is two tracks toward one goal: Both church planting and evangelism.

January, 2006 – At the third Global Pastors Conference features a “Finish Line” meeting where world leaders gather about the unreached people of the world.

Putting the Cross on the roof of the world.

August 2007 – Edmund Hillary’s story challenges Christians to do what has never been done before – to climb the Mount Everest of the Church and complete the Great Commission.

December 2007, March 2008, September 2008, May 2009, April 2010 – West Africa – Nigeria. Major denominational leaders meet for the first time. “This is the first time the global church is being mobilized together to share out resources and to synergies our efforts together to help finish the Great Commission.” – Ademola Ishola, PhD, Nigerian Baptist Convention

January, 2008 – The first Synergize Conference is held, Atlanta. Cochairs Meet at the North American Mission Board

10,000 Global leaders discuss how to synergize resources and relationships to help complete the Great Commission.

South American leaders choose to double the size of the church!

January, 2010 – Synergize 2 in Orlando. The Global Church came together to save the world!

In each global region, church leaders take ownership for church planting in their region. Together, they set collective goals to meet the greater goal to plant five million new churches.