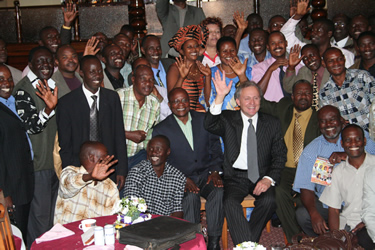 Dr. Alex Mitala, General Overseer of the 15,000 members of Born Again Churches of Uganda recently invited James O. Davis to speak to Bishops in the nation to link arms with the Second Billion movement. He is bringing a large bishop delegation to the Synergize! Pastors Conference.

As we travel and minister throughout the world, it is more apparent than ever that the faces of Christianity are changing and the places of Christianity are moving. In the last twelve months, we have synergized and strategized with world class pastors in every major world region. Just as Everest rises higher than all other mountains, our Lord has raised up global churches of influence, not just to be admired, but to be learned from in the 21st century.

General Overseer Dr. Enoch Adeboye of the Redeemed Christian Church of God in Lagos, Nigeria projects building a church within five minutes walking distance of every rural home and five minutes driving distance in metropolitan areas. At the SYNERGIZE! Pastors Conference, his presentation, “Moving From Leading To Coaching” will impact and inspire. It was a humbling experience to minister at this year’s Holy Ghost Congress with more than two million people.

Dr. Ademola Ishola, the CoChair for West Africa and the General Secretary for the Nigerian Baptist Convention, hosted me at their International Headquarters and Bowen University. He leads nearly 10,000 churches comprising nearly nine million people. The Nigerian Convention is the second largest in the world. At the present time, they are planting nearly three churches per day, averaging nearly 1,000 per year.

The Holy Spirit is also moving through East Africa. After speaking to a group of hundreds of pastors in Nairobi, Kenya, Dr. Peter Njiri and I discussed global mobilization strategies. As a close friend, I have watched firsthand for more than twenty years as Dr. Njiri’s single church multiplied to 38 churches, while he has provided leadership for nearly 4,000 more church plants nationwide. Dr. Njiri is the CoChair for East Africa and the chairman for over 20,000 churches in 17 nations through East Africa.

Dr. Alex Mitala is the CoChair for Global Mobilization and is the General Overseer Of Born Again Churches of Uganda. By God’s grace, in just one generation through his GLOVIMO movement teaching the virtues of virginity and marital monogamy, the national AIDS rate has dropped from 30% to 6.4%. From a generation of whom 70% did not live past age 42, God has raised up a new generation of leaders and followers of Christ!
Look at the mountain peaks our great God has given us!

Tricia Neill serves as the Executive Director for Alpha International. Alpha has a global reach with nearly 40 million who have taken their evangelistic curriculum that exists in nearly 80 languages.

George Sawyer founded a large multicultural congregation, is developing a 180-acre church facility, and leads one of the largest missions-minded churches in the US.

Paul Cole is a Pastor and Christian television pioneer; Cofounder and President of the Christian Men’s Network, an international movement of men started by his late father, Edwin Louis Cole; more than one million participants worldwide.

TAKING THE FEAR OUT OF FEAR

In Christian leadership, if we are not careful, we can begin to doubt our beliefs and believe our doubts. We do not know what will take place in 2008, but we can always place our cares in the hands of our almighty God. Be sure to download, “Taking The Fear Out Of Fear” and be refreshed this holiday season!

While in Uganda, we visited the Source Of The Nile River. The Nile River is more than 4,000 miles long and it takes the water three months to flow from its source to the Mediterranean Sea. The Prophet Ezekiel prophesied about a future river of God. This God-given River was a humble, holy, high-rising, healing and harvesting river. When the River of God arrived to its destination, transformation and harvest were the miraculous result. Fisherman caught fish where they had never caught fish before!

Our prayer is to experience a genuine, life-changing spiritual awakening in the world. Blessings!