The Keys to Global Mobilization 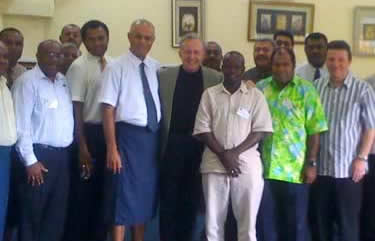 In Fiji this week, leaders prepare for the Oceania Summit this Fall. Global Leadership Summits can be found at www.BesttotheRest.org.

Once we have synergized and strategized, we must become mobilized in order to achieve our ministry goals. Mobilization is one of the hardest steps on the journey toward local, national or international success. Just a few days ago, I received a powerful letter from Dr. Alex Mitala, the Second Billion Cochair of Global Mobilization. Here is a condensed version:

The “ONE TO ONE” Evangelism and Discipleship campaign will involve one million born again and willing Christians In Uganda with the aim of             converting one million people into the Kingdom of God in the period of one  year between October 2008 and December 2009.

The strategy is simple in Uganda:

The task is for every participating Christian to WIN ONE person to Christ during the period of ONE year.

It will be the responsibility of each registered participant to:

The participant will be responsible for finding a Bible for that person as well as knowing all the details of the newly coverted person.

We pray that we will celebrate ONE MILLION souls for the Kingdom in December 2009, with the Second Billion friends all over the world.

Already 100,000 willing Christians have registered with the movement, just in Kampala City. Pray for the Vision.

Let us pray together that the Lord of the Harvest raise up another one thousand leaders like Alex Mitala who believe it is possible to transform the world through the power of the Holy Spirit. Under his leadership already, AIDS among young men in Uganda has dropped from 54% to 6% over the last 15 years! Watch for details of a special leadership summit with Alex where you can join us and learn “The Keys Of Mobilization.”

CoChair/US Gulf Region
Pastor Dwayne Pickett of New Jerusalem Church in Jackson,Mississippi, leads a growing congregation of more than 4,000 worshippers. This progressive church is sponsoring the upcoming Southeast Asia Summit in Jakarta, Indonesia. Pastor Pickett will also serve as the CoChair of the Gulf Region in the United States.

Emmanuel Ziga is the Founder and President of Grace For All Nations, in Seattle, Washington. Evangelist Ziga will serve as the Cochair of the Northwest Region in the US. Last week, he hosted a Leadership Summit in Seattle where hundreds of leaders focused on winning the Second Billion in this generation.

SPRING SERMON SERIES:
Many churches have the finest in technology but have not been able to mobilize their people toward the fulfillment of the Great Commission. As we continue our Spring Sermon Series, be sure to download Silver, Suit and Meal Ticket.

The cycle of spiritual movements remind us that typically the first generation generates; the second generation motivates, the third generation speculates and the fourth generation dissipates. Unless each generation continues to move forward, then decay and death will eventually stop the movement. Let’s get mobilized together!