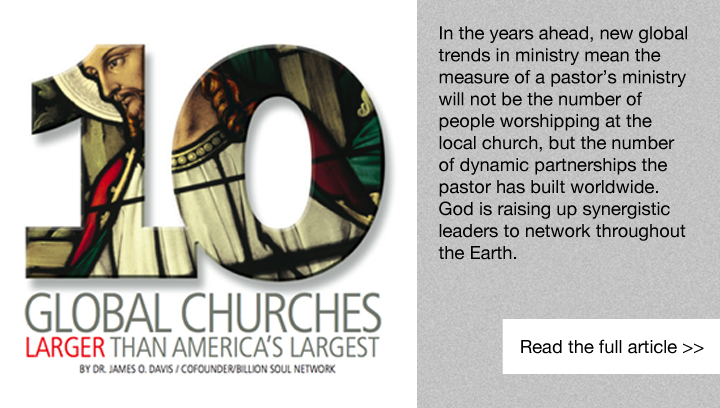 People often ask me, “What is going to happen to Western Europe? Is there any hope that millions will come to Christ in this world region or that thousands of churches will be planted? Will America cool down spiritually like Europe? Can America be turned around before the culture passes the tipping point?”

Big questions deserve big answers. One thing we can rely on is that the global church will never be any smaller than it was yesterday!

Some missiologists today believe that the “Rise Of Global Christianity” will impact Europe and North America, as well as the entire world. I believe this and I have seen it. We are witnessing before our eyes the rise of a Global Church that is just as committed to fulfilling the Great Commission worldwide as in each individual world region. The Great Commission will be fulfilled! God will keep His promise!

In the last six years, the Global Church has witnessed more than 1.4 million new church plants with more than 250 million coming to Christ. The Church of the Lord Jesus Christ is growing faster than in any other time in history. When one measures the global growth of the Church, we are on schedule to witness firsthand the doubling of the size of the Church, from just over one billion to more than two billion in our generation.

This missional shift for me began on a sunny afternoon in Springfield, Missouri, in 2005. I had taken my eldest daughter, Olivia, to a nearby park to play. While I was looking into her laughing eyes, the Holy Spirit quickened to my heart this phrase, “Look at who I have raised up all over the world.” Since that moment, I have been on a missional pursuit to learn all I can about who the Lord has raised up in the earth to help fulfill the Great Commission.

Within this global context, it becomes understandable that great, missional-minded pastors have built churches in parts of the world that are larger than the largest churches in the West. By presenting these pastors and churches, we simply but clearly demonstrate who the Lord is raising up. This strengthens the hope in all of us worldwide that the Lord will finish what He said he would do regarding the fulfillment of the Great Commission.

A tide of evangelism and church planting is rising across the earth as never before. Those wasting time standing on the beach are going to get more than wet. They are going to be washed off the beach of time without another opportunity to be involved in Bible-based, missional ministry.

David Yonggi Cho, Seoul, South Korea: Beginning in the 1980s, due rapid growth, Full Gospel Central Church decided to establish satellite churches throughout the city of Seoul. As exponential growth continued, reaching 700,000 by 1992, the need for satellite churches became more pressing. Despite the drain of members to the satellite churches, new recruits by the mother church – brought in through the vast cell network – made up for the losses, and membership stood at 780,000 in 2003. The church was renamed Yoido Full Gospel Church in the 1990s. As of 2007, membership stands at 830,000 with seven Sunday services translated into 16 languages.

Eduardo Duran, Jotabeche Methodist Pentecostal Church, Santiago, Chile: The Jotabeche Church has 350,000 members – which makes it the second largest in the world. The size and growth of this church are a prime example of an explosion of church growth in Latin America. The numerical growth alone of these churches is cause for wonder: in 1900, there were only 50,000 Protestants in Latin America. In the 1980’s they had grown to 50,000,000 and by the year 2000 they reached 137,000,000.

Kong Hee, City Harvest Church, Singapore, Singapore: As a young man, a Bible study group in Singapore, wanted Kong Hee to be their shepherd, to pastor and lead them. With the support and encouragement of numerous senior pastors in the city, Kong decided to pioneer a new work, and put aside his desire of becoming a traveling minister. With the affiliated Harvest Churches, the combined worship attendance has exponentially grown to more than 40,000. Today, CHC holds its main English services on Saturday and Sunday at Suntec Singapore.

Suliasi Kurulo, World Harvest Centre in Suva, Fiji:From the 164th poorest national economy, and coming from an even poorer background, Suliasi Kurulo has been graced by God to build one of the strongest churches in the world today. Over the last twenty years, he has crisscrossed the globe planting more than 3,000 churches out of the parenting church in more than one hundred nations. More than 200,000 members worship each Sunday through World Harvest Centre and its daughter churches, many of which are located in formerly unreached people groups that Fijian ministers have evangelized.

Ray McCauley, Rhema Bible Church, Johannesburg, South Africa: On returning to South Africa after Bible College, Ray McCauley started Rhema Bible Church in the home of his parents, Jimmy and Doreen, with 13 people attending. Membership grew and the church moved into a former cinema in Rosebank, Johannesburg. The church outstripped the cinema, then a warehouse and finally moved to its current location in 1985 in Randburg, Johannesburg. The 5000-seat auditorium was then upgraded to over 7500 seats to accommodate the congregation that currently numbers 45,000 strong, the single largest church congregation in Southern Africa. While Rhema Bible Church has continued to grow, more than 400 additional churches have been planted throughout South Africa.

David Mohan New Life Assembly in Chennai, India: Dr. David Mohan is the Senior Pastor and founder of New Life Assembly of God in Chennai (Madras), which has grown from seven people to 40,000 people, not counting the hundreds of satellite churches that have multiplied out of the mother church. Faith and passionate prayer are the two most important factors in the ongoing growth of this church. He is Chairman of the Indian National Prayer and Church Planting Initiative. He serves on the board of directors of Church Growth International and is the first pastor to receive the Bill Bright Leadership Award for International Pastors. Under Pastor Mohan’s leadership the Assemblies of God of India has established a goal of 25,000 new churches by 2020.

David Oyedepo, Winners Chapel, Ogun State, Nigeria: Dr. Oyedepo is the senior pastor of Faith Tabernacle, a 50,000 seat church auditorium reputed to be the largest church auditorium in the world by the Guinness Book of Records, which averages more than 225,000 worshippers each weekend. The Winners Chapel network of churches is in over 300 cities in all states of Nigeria, as well as in over 63 cities in 32 African Nations, Dubai, the United Kingdom and the United States. David Oyedepo has been seen as one of pioneers of the Christian charismatic movement in Africa. He has been referred to as one of the most powerful preachers in Nigeria and in the world.

Sergio Solorzano, Elim Central, El Salvador, San Salvador: Once known as the second largest single church in the world, the ministry has a membership that now surpasses 115,000 people and at its peak numbered as much as 200,000. Pastor Solorzano’s church has more than 500 full-time pastors in El Salvador alone. The church is known for its “Time of Restoration” events in which hundreds of thousands of people gather from all around the world to worship together. These events have sometimes been held simultaneously in all of the major sports stadiums in El Salvador.

David Sobrepeña, Word of Hope, Manila, Philippines: In 1980, David Sobrepeña returned to his homeland from Dallas, Texas, to plant a church in Manila, Philippines. On the first day, Word of Hope, only had three people attend in a movie theater. They were Pastor Sobrepeña, his wife and son. Today, Word of Hope has grown to nearly 45,000, plus satellite churches have been planted throughout greater Manila, and hundreds more throughout the nation. More than 300,000 pastors and leaders have been equipped for leadership throughout the Philippines. The church trains church planters during the rainy season, and plant new churches nationwide during “church planting season.” In recent years, Pastor Sobrepena has helped to teach thousands of new church planters throughout Asia, Europe and Africa.

Church of God, Surabaya,Indonesia: Bethany Church ofGod, founded in 1978, has become one of the strongest mission-sending churches in the world. In the largest Muslim populated nation on earth, where intense persecution routinely
occurs, this worship center is the largest public building in
Indonesia with a seating capacity of 40,000. The congregation of Bethany averages more than 200,000, not including the hundreds of additional satellite churches that have been planted out of the mother church. Each year, missionaries are sent to plant churches throughout the world.

Today, our Lord continues to raise up “mountains of ministry” throughout the earth for the fulfillment of the Great Commission. The phenomenal churches highlighted represent a small portion of what the Lord is orchestrating and networking to compound the size of the Global Church. “Honorable mentions” would be too numerous to even start writing. Without exception, each of these pastors have chosen to become a mission-sending church, in addition, to be a soul-winning church. Most of them; are planting churches in North America!

Indeed, our present generation can be the generation that finally puts the Cross of Jesus Christ on the roof of the world and lets the whole world know that Jesus died for every nation and every people group! When this is achieved, we will have a satisfaction that no previous generation has ever had. The Global Church will achieve together what no one of us can do alone.

We must be motivated about what motivates Heaven. How many people will you be responsible to win this year? How many churches will you help plant in your lifetime? How many missionaries will your church family send? We can achieve more together than we ever could alone by synergizing our efforts to bring back the King. Can you think of anything more important to accomplish with your life?

In the future, those who are not networking will eventually be not working. The Cochairs of the Billion Soul Network look forward to networking with you, so we can place the cross of Christ on the roof of the world. As the great evangelist Reinhard Bonnke says, “If we are interested in soul winning, then heaven is interested in our success. God’s main purpose is winning the lost.”