Why 5 Million Churches & A BILLION Souls?

For more than 2,000 years, the Church has worked to fulfill the Great Commission of our Lord. After all our collective work, in AD 1900, just 45.69% of the world was evangelized. With another century behind us, more than 73.09% of the world has heard the Gospel. Yet today, more than 2.4 billion people have still never heard of Christ. Church leaders are rushing to fill this great, unacceptable gap. After all these years, why should we race to plant five million churches for a billion more people to Christ? And, how well are we doing toward our goal? 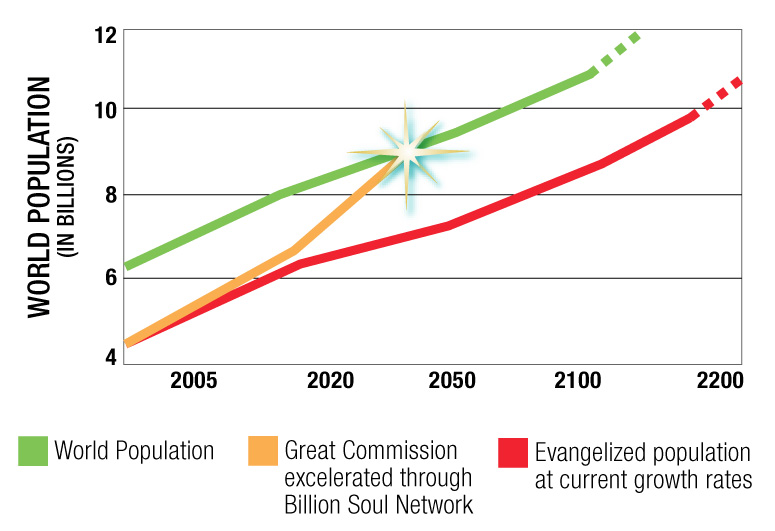 Globally, Christian leaders can choose to continue with our present strategies, and in AD 2200, 83.25% of the world will be evangelized. This appears to be great progress, but the world population will exceed 9.5 billion by 2050 and will reach nearly 11 billion by 2100.That means, the unevangelized population would continue to increase over the next one hundred years. The staggering fact is that at the current rate of growth, the global Church will win more than three billion people to Christ by 2100 and still over two billion will be unreached, having never heard the Gospel even one time. Comparing Church growth to population growth, the Church will not fulfill the Great Commission even by AD 2500. Billions upon billions of people from near future generations will die, lost forever.

Statistically, if Christian organizations do not partner to work together but continue to try to win the world alone the way we’ve done for centuries, then our children’s children and their children’s children will not come close to seeing our Lord’s Commission finished in their lifetimes.

In another scenario, the global Church could choose to synergize our efforts and share our resources. A growing number of Christian denominations and organizations, now numbering more than 1,500 comprising nearly 500,000 churches, believe it is possible to speed up church growth by helping each other to plant five million new churches and win a billion souls to Christ. 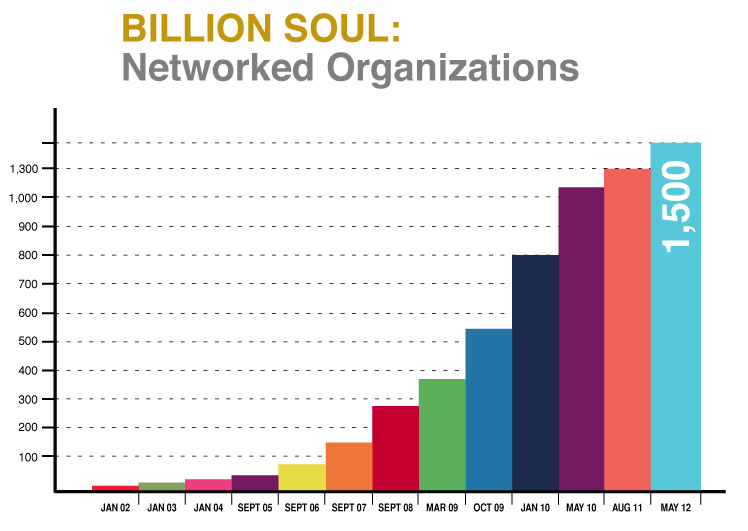 According to many international Christian leaders such as Suliasi Kurulo, Founder of the World Harvest Center and CoChair/Unreached Peoples, we have been given the first time in modern Church history, where have a realistic opportunity to complete the Great Commission in our lifetime, or at least that of our children. Pastor Kurulo’s World Harvest Center has planted more than 3,000 churches in more than 110 nations.

More leaders are becoming more convinced that the way we can follow our Lord’s command faster is by being willing to “leave logos and egos behind” and become serious about fulfilling the Great Commission. This philosophy does not mean that one has to surrender his or her uniqueness in Christ or doctrinal distinctive in order to network for compounding results. In such a scenario, we retain our uniqueness, but do not care who gets the credit as long as God gets the glory. This moves the Church from evangelistic growth to exponential growth, from traditional missions to global missions.

God is aligning His forces around the world for the greatest evangelism thrust in Church history. Dr. Ademola Ishola, Former General Secretary of the Nigeria Baptist Convention in Abuja, Nigeria, and CoChair/West Africa believes, “Through the Billion Soul Network, for the first-time in history is mobilizing the Global Church to help finish the Great Commission.

“I knew from our first meetings,” states Dr. Jack Hayford, “that this partnership would be more than just a cohort of like-minded leaders who hoped to make some difference in the world. This has grown into one of the most embracing missional partnerships representing the diversity of the Body of Christ in church history… We agree we must, together, find ways to understandably share the Good News with and to serve these for who Jesus died and rose again! It blesses me when I see our brothers and sisters as the Bride of Christ respond to the clarion call to be ready for the return of Jesus through the fulfillment of the Great Commission.” 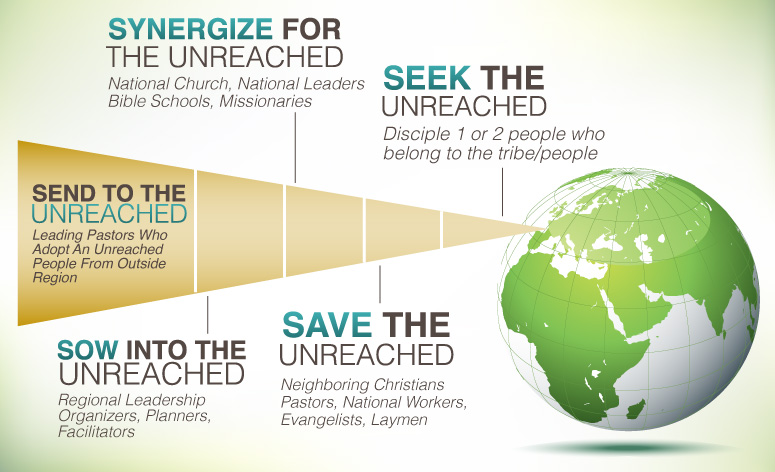 Roland Vaughan, former World Missions Director for the Church of God, Cleveland, Tennessee, developed a divinely-inspired approach to networking among the unreached people groups of the world. His Finish Line metaphor encompasses the strategic analogy of the thrusting of the arrowhead into its target. This Finish Line approach allows any local church to seek the lost, save the lost, synergize for the lost, sow into the lost and send to the lost. This powerful sequence begins with one or two disciples in an unreached people group, then moves to Christians in the area, the national church in the country-such as the Bible colleges, seminaries, missionaries, denominations -then to the strong Christian Forces in a region and finally to the North American Church.

Stan Toler, General Overseer for The Church of the Nazarene, Kansas City, Missouri, articulates, “Through our Billion Soul Network partnership, we are able to make available some of the finest resources in the Body of Christ today. The global tsunami wave of the future is not the West going to the rest, but the best going to the rest. It is not about the West telling the rest of the global Church what to do or not to do. It is about synergizing for effectiveness, strategizing for evangelism and sharing for equipping to finish the Great Commission.”

In the years ahead, these new trends in ministry mean the measurement of a pastor’s ministry will not be the number of people worshiping at his local church, but the number of dynamic partnerships he or she has built worldwide. God is raising up synergistic leaders to network throughout the earth. 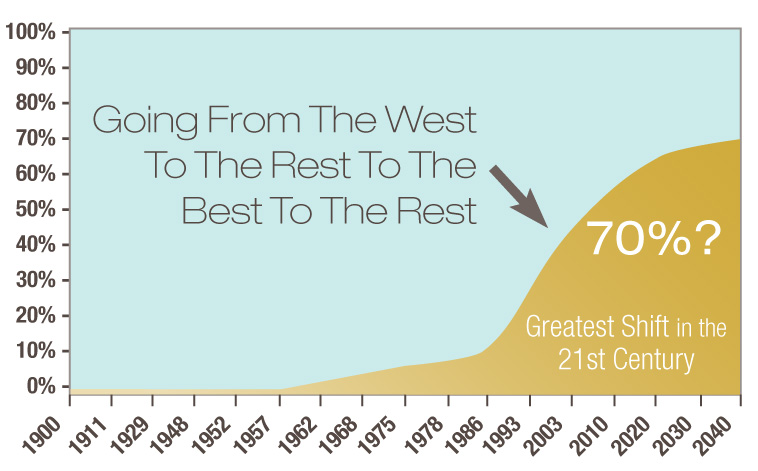 I am often asked, “What is going to happen to Western Europe? Is there any hope that millions will come to Christ in this world region or that thousands of churches will be planted? Will America cool down spiritually like Europe?

Some missiologists today believe that the “Rise Of Global Christianity” will not only impact Europe and North America, but the entire world. I believe this and I have seen it. We are witnessing before our eyes the rise of a global Church that is just as committed to fulfilling the Great Commission worldwide as in each individual world region. By 2030, 70% of the global missions force will not be from North America. In the single, greatest missional shift in church history, missionaries from every world region are headed to every world region. The Great Commission will be fulfilled! God will keep His promise! 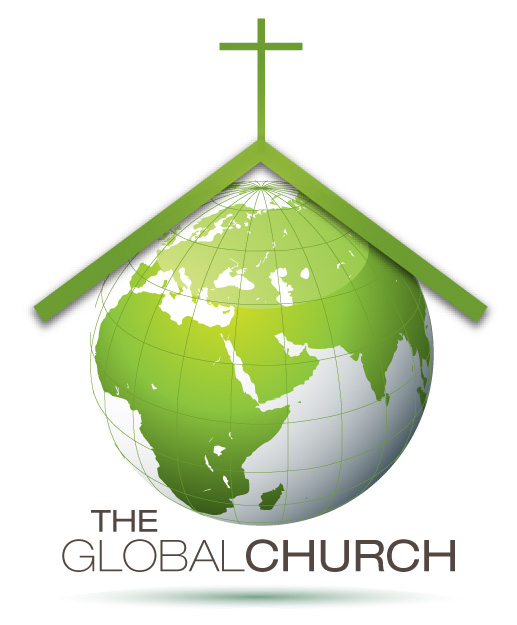 Since we were fortunate to launch the Billion Soul Initiative in 2005, Global Church has witnessed more than 2 million new church plants with more than 345 million coming to Christ. When one measures the global growth of the Church, we are on schedule to witness firsthand the doubling of the size of the Church, from just over one billion to more than two billion in our generation.

Ours can be the generation that puts the cross on the roof of the world and lets the whole world know that Jesus died for every nation and every people group! When this is achieved, we will have a satisfaction that no previous generation has ever had! The global church will achieve what no one of us can do alone.

We need to be motivated about what motivates heaven. How many souls will you be responsible for? How many churches will you help plant? How many missionaries will your church send? We can achieve more together than we ever could alone by synergizing our efforts to bring back the King. Can you think of anything more important to accomplish with your life?

In the summer of 2003, I looked into the eyes of dear friend for the last time. He said to me, “We have had a lot breakfasts together, but the next time, we will supper together. I said to him, “The next time we see each other, I want you to ask me one question. I want you to ask me, ‘Were you faithful to the vision?’ I will answer by saying, ‘In my generation five million churches were planted and a billion people came to Christ.'”