The Inspirational Story Of America’s First Missionary To The World! A Must Read! 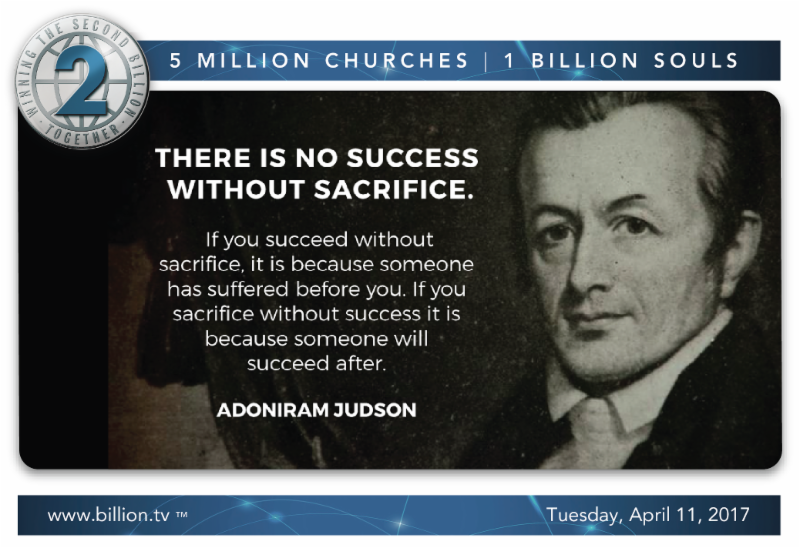 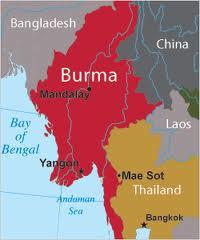 In 1812, Adoniram and Ann Judson left Massachusetts for India to become the “First North American Missionary.” Here are the actual words of Missionary Judson:

One day I found a book in the seminary library that talked about a British officer who was sent to Burma in 1795. As I read about the land of Burma where people worshiped idols, I felt a strange fiery excitement inside. I am staring at my future! I thought. I’ll tell the Burmese people about Jesus!

On February 18, 1812, shortly after I was ordained as a missionary, my new wife Ann and I sailed away from our family and friends in America. Four of my friends became missionaries with us and, in fact, we became known as America’s first missionaries. While our friends went to India, Ann and I followed our hearts to Burma, where we hoped to tell the Burmese about Jesus. 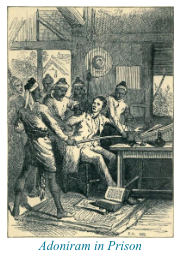 After we arrived in Burma, Ann and I learned the new language.
It took me years to do it, but I translated the entire Bible into
Burmese. Although we told them about Jesus all the time, it took six
years before one person accepted Jesus as their Savior.

After a brief stay in India, he and his wife traveled to Burma, arriving in 1813. They were both 24 years of age when they left America. In Burma, no one knew the English language and the Judsons learned the Burmese language on their own.

In those early years, they experienced the heartbreaking loss of two children. In 1822, Ann’s health broke and she returned to the States for rest, publishing a book on their pioneering missionary work in Burma. Upon her return, in 1824, Adoniram was imprisoned and tortured. Ann followed her husband from prison to prison and preserved his and several others’ lives by bribing officials and providing food.

In 1826, after two years of imprisonment, Adoniram was released. But in October of that same year, while Adoniram was away, Ann died at age 38, worn out from hardships. 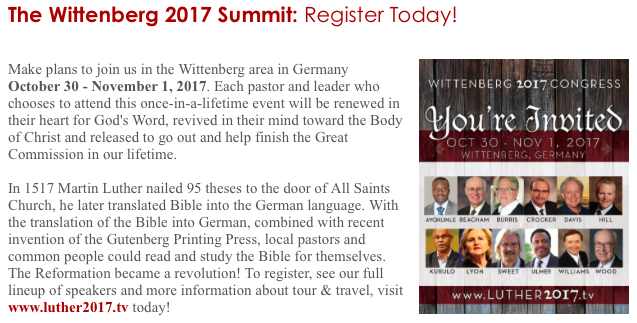 Read carefully the letter that Adoniram wrote to Ann’s father, when he requested her hand in marriage: 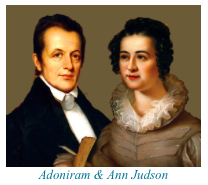 I have now to ask whether you can consent to part with your daughter early next spring, to see her no more in this world. Whether you can consent to see her departure to a heathen land, and her subjection to the hardships and sufferings of a missionary life? Whether you can consent to her exposure to the dangers of the ocean; to the fatal influence of the southern climate of India; to every kind of want and distress; to the degradation, insult, persecution, and perhaps a violent death? Can you consent to this, for the sake of the perish immortal souls, for the sake of Zion and the glory of God? Can you consent to all this, in hope of soon meeting your daughter in the world of glory, with a crown of righteousness brightened by the acclamations of praise which shall redound to her Savior from heathens saved, through her means, from eternal woe and despair? 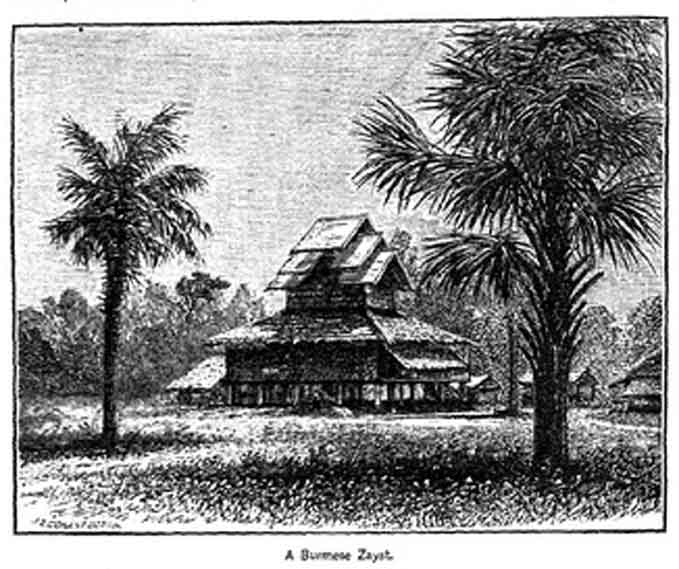 He accommodated to some Burmese customs and built a zayat, the customary bamboo and thatch reception shelter, on the street near his home as a reception room and meeting place for Burmese men. Fifteen men came to his first public meeting in April 1819. He was encouraged but suspected they had come more out of curiosity than anything else. Their attention wandered, and they soon seemed uninterested. Two months later, he baptized his first Burmese convert, Maung Naw, a 35-year-old timber worker from the hill tribes.

It took Judson 12 years to make 18 converts. Nevertheless, there was much to encourage him. He had written a grammar of the language that is still in use today and had begun to translate the Bible. His wife, Ann, was even more fluent in the spoken language of the people than her more academically literate husband. She befriended the wife of the viceroy of Rangoon, as quickly as she did illiterate workers and women. 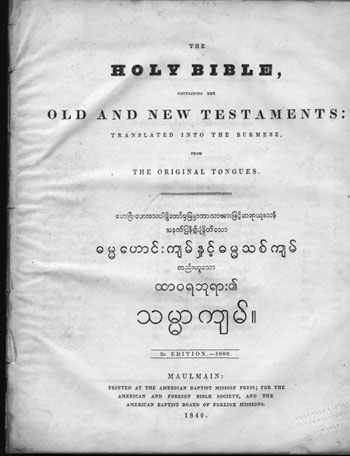 By 1823, ten years after his arrival, membership of the little church had grown to 18, and Judson had finally finished the first draft of his translation of the entire text of the New Testament in Burmese.

Judson compiled the first ever Burmese-English dictionary; missionary E. A. Steven completed the English-Burmese half. Every dictionary and grammar written in Burma in the last two centuries has been based on ones originally created by Judson. Judson “became a symbol of the preeminence of Bible translation for” Protestant missionaries. His translation remains the most popular version in Myanmar. 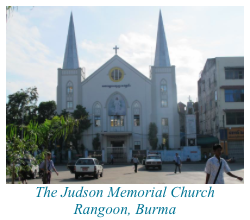 He was only 62. But, one mission was completed, the Burmese had the Bible in their own language, a translation that stands to this day, with over 2 million Christians in Myanmar! In succession, the three women, Judson married and died before him, and he lost his life at sea.

His one surviving son, Edward, speaking at the dedication of the Judson Memorial Church in New York City, summarized his father’s story: “Suffering and success go together. If you are succeeding without suffering, it is because others before you have suffered; if you are suffering without succeeding, it is that others after you may succeed.”